India is well know for its diverse culture and traditions. India is the home land for various folk forms diversified according to the region of origin. Bhangra is the traditional folk form originated from Punjab. Apart from Punjab, Bhangra has gained its global recognition. The story of Bhangra has lot to speak.

Originally, the bhangra was just a folk dance that was confined to the Punjab du­ring the harvest festival of Baisakhi.  This was per­formed only by men, while the wo­men would perform the giddha.  Over the centu­ries, bhangra grew to encompass not only the giddha but a num­ber of rural Punjabi folk dances.  It grew in pop­ular­ity, and expanded its range to the point where bhangra was then found over much of Northwest India and Pakistan.  Fur­ther­more, it could be per­formed on any festive occasion, and not just du­ring the harvest festival.

The seeds of bhangra's growth as an inter­national art-form began not in India, but in Great Bri­tain.  The Indo-Pakistan ex­pat­riate com­mu­nity was lacking a clear symbol of its own ethnic identity.  This com­mu­nity was starting to be com­prised of se­cond and third ge­nera­tion South Asians.  They could no longer easily relate to a chan­ged India or Pakistan, but were also un­able to comp­letely assimilate into trad­itional Bri­tish so­ciety.  They were struggling to have a clear symbol of their own identity.  In this cul­tural vacuum, the bhangra grew to be­come an impor­tant symbol of their self identity.

Bhangra first began to make its mark inter­nationally du­ring the 1970's.  At this time, art­ists such as A.S. Kang and Kuldip Manak began to make a com­mercial success out of it.  It was also in this period that bhangra began to be widely accepted as a genre of music rather than sim­ply a dance form.  In the next few de­cades bhangra grew into a truly inter­national phe­no­menon.  It is to be found wherever there is a large ex­pat­riate In­dian com­mu­nity. 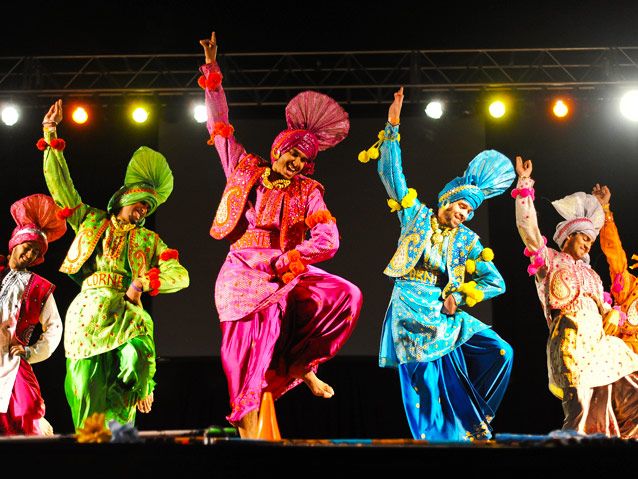 We have seen bhangra expand fur­ther un­til now it is al­most a sub­culture.  Implicit in the bhangra are not just the music and dance, but also a life­style.  At first, this might be hard to conceive, but it cer­tainly is not a unique occurrence.  Perhaps the most well known example of this sort of thing was the disco move­ment in the late 70s; disco too encom­passed music, dance, as well as a whole life­style.

Men tend to wear a chadr, a kurta, a vest, and a pagh, while women wear a salwar, a kurta, a vest, and a chunni. The chadr is the bottom half of the outfit, and consists of a long, rectangular piece of unstitched cloth tied around the dancer's waist. It covers the majority of the dancer's legs and is strategically tied so as to prevent the cloth from restricting the dancer's movement. The female complement to the chadr is the salwar. The salwar consists of loose fitting trouser pants with numerous pleats stitched into the fabric. In contrast to the chadr, the salwar covers the dancer's leg completely. The trousers are stitched so that when the dancer performs high-knee and leg-lifting steps, the pleats artfully hang to mimic the effect and coverage of the chadr.

Daankara - The term "daankara", is der­ived from the word "daan", which means "stick".  As the name implies, this dance is performed with sticks.  This dance tends to be done at weddings.  It has a cer­tain si­mi­larity to the dandiya raas of Gujarat.

Dhamal - The dhamal is a par­ti­cu­larly energetic form of folk dance.  This dance is done by the partici­pants forming a circle.  In this the dan­cers hold their hands in the air as they dance about, there are many inter­jections and much shouting.

Gatka - The gatka is dance that is performed with swords, daggers, or sticks.  It is said that this dance was star­ted after the martyrdom of the fifth Guru Arjun Dev.

Jhumar - The term "jhumar", means to "swing".  The jhumar is a men's dance that is performed at wed­dings and other festive ev­ents.  It developed in the Sandalbar, and Balochi­stan area of Pakistan.  It is cha­rac­terised by a par­ti­cu­lar rhythm which is sub­stan­tially slower than that which is normally used in bhangra.

Julli - Where most of the forms of bhangra are done by groups of peo­ple, julli may be done by a sin­gle per­son.  It has its origins in the dance of the Muslim holy men and may be done from a sit­ting posture.

Kikli - The kikli is gen­erally performed by wo­men.  For this, wo­men lock there hands and swing about in circles.  These are us­ually pairs of girls, but on occasion four girls may perform this move.

Luddi - The luddi is a dance that con­tains a vary cha­rac­teristic posture of the bhangra.  In this, the dancer has one hand be­hind their head and the other hand out­stretched.

The Music of Bhangra

Today, bhangra is not just a dance but is also a mus­ical style.  As this music has be­come inter­nationalised, it has under­gone quite an evolu­tion.  Where it was once a purely folk music of Punjab, today elements of rap, hip-hop, and other com­mercial Western forms may be found enfolded within it.

Melodically the bhangra uses an ext­remely small num­ber of notes.  The range sel­dom extends an octave.  Still, even with the limi­ted num­ber of notes used, the bhangra may be ext­remely expressive, due in great part to the lyrical nature of the songs.The huge Punjabi diaspora has spread Bhangra across the world. It has now become mainstream enough where Bhangra influences can sometimes be seen in Western pop/hip-hop music. Bhangra music became extremely popular in the United Kingdom. Its enormous Punjabi population first combined traditional Bhangra rhythms with Western music. Bhangra music and Punjabi culture became prevalent in Bollywood cinema as well, especially during scenes of jubilation.

The rhythms of bhangra tend to be very lively.  They are us­ually based upon a very fast kaherava tal of eight beats.  How­ever this eight beat pattern is al­most never per­formed straight, but us­ually incorpor­ates a strong syncopation (i.e,. a heavy "swing").  The jhumar tends to be much slower, and at times utilises a half cycle version of punjabi theka (i.,e based upon eight beats rather than 16).  At other times, the jhumar may be based upon a hemiola in a man­ner some­what si­mi­lar to the Gujarati raas music. Bhangara is accompanied by various musical instruments.Perhaps the most famous Bhangra instrument is the dhol. It is a double-sided barrel drum that creates the beat to which Bhangra is danced to. The person who plays the instrument, the dholi, plays various beats to create the different Bhangra segments, such as Dhamaal, Jhummar, One side of the dhol has thicker skin, which creates a deeper sound, and the other side has a thinner skin, resulting in a higher-pitched sound. Two sticks are used to play the dhol instrument. The thicker stick, called the dagga, is used to play the bass side. The thinner tilli is used to play the treble side. Both sticks are usually made of wood or bamboo.Algozey resemble two wooden flutes that are played simultaneously, with the artist using three fingers on each side.The dhad is a much smaller, high-pitched drum. It is also double-sided, but its body is shaped like an hourglass. The chimta functions as a large pair of metallic tongs. Each side of the tongs has bells attached that chime loudly when the sides are struck together. The chimta player can either accompany the other instrumentalists or dance with the Bhangra dancers while simultaneously playing the instrument.

What Do You Need To Know To Protect Your Data